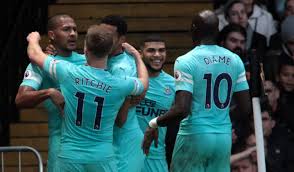 Javi Gracia defended his decision to start key players on the bench as his Watford side left it late to salvage a point against Newcastle.

With the Hornets a goal down following Salomon Rondon's 29th-minute header, Gracia brought on skipper Troy Deeney and midfielder Abdoulaye Doucoure, who headed in the equaliser eight minutes from time.

The Watford manager made six changes to his starting XI as his side played a third Premier League game in eight days.

When asked if that was too many he said: "If you see the result you can say that, but I don't agree.

"I think we started well, created good chances, clear chances and we didn't take them. After that, we knew the game would be very demanding for us but after conceding the goal it was even more difficult.

The Hornets had dominated possession during the match but found it difficult to create chances against the Magpies, who took the lead when Rondon nodded in. The Venezuelan striker also had two goals disallowed for offside, although the first decision was marginal.

Forward Isaac Success was impressive in attack for the home side, and went close when his goal-bound shot was brilliantly blocked by Federico Fernandez.

Gracia's decision to make six changes to his starting line-up seemed a poor choice during a match in which his side showed good intent but not much more.

Newcastle packed the area in front of the defence and left Rondon up on his own, making it doubly difficult for the home side to find a route into the area.

When they did pierce the 18-yard box they were met by unflinching resistance, with Gerard Deulofeu denied by the foot of keeper Martin Dubravka before Success saw his shot deflected wide by Fernandez.

Watford looked increasingly less likely to find an equaliser as the match approached the final throws, but then up popped Doucoure.

The 25-year-old has scored some brilliant goals for the Hornets, but this was a simple in its execution from Deulofeu's delivery.

The point moves Watford up to ninth spot with 28 points from 20 games.

The Venezuelan's display at Vicarage Road was reminiscent of another striker who once graced the Newcastle number nine shirt.

The club's all-time leading scorer Alan Shearer will no doubt be one of many unrestrained in their praise of a performance that almost earned the Magpies a valuable victory in a stuttering season.

Rondon, on loan from West Brom, held the ball up well, brought others into play, was a handful in the Watford box and should have come away from Vicarage Road with more than his one goal.

Aside from his first-half header from Matt Ritchie's cross, he also had two other efforts ruled out for offside - the first debatable with former Magpie Daryl Janmaat appearing to have played him onside as the striker broke away.

Next up, it is Manchester United at home for Rondon and the Magpies.