Wally Takes His Brolly To Spain!

The Magpies slipped back into the relegation zone as they crashed to a 5-1 defeat at Stamford Bridge, with pundit Jamie Redknapp branding their display in the opening period as “the worst 20 minutes in Premier League history”.

With no game on the next two weekends because of the scheduling of the FA Cup and Manchester City’s appearance in the Capital One Cup, Newcastle now have an 18-day break before they return to action at Stoke City.

McClaren has decided to fill some of the time by scheduling a training break to Spain, with a friendly lined up against Norwegian club Lillestrom.

The wisdom of ‘rewarding’ his underperforming players in such a manner in has been questioned in some quarters, but McClaren maintains it is the right thing to do and is adamant he will be pushing his squad to the limits once they travel to La Manga.

“I don’t know why people are saying it’s a warm weather trip – it could be pouring down where we’re going,” said the Newcastle head coach. “Nobody knows that.

“We wanted to refocus the boys and get them together, and get some good work in. Get some fitness work in and some organisation work in. We also wanted to arrange a game. 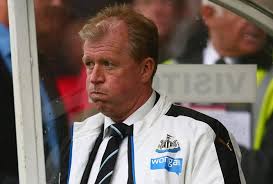 “We’ve tried like mad to arrange a game in this country, but we’ve been unable to do that. The only one we can get is foreign opposition in a foreign country. So we have to do that because I think a game is important.

“It’s a training camp, and it’s for work. I’m looking forward to that, with two sessions a day and plenty of organisation and fitness work. It’ll help us get ready for the last 12 games.”