Villa v Toon - Reason Why It Is So Bitter 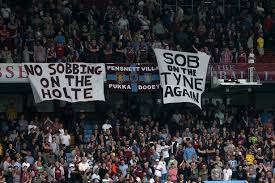 The rivalry between Aston Villa and Newcastle United has been intense since the Magpies' relegation in 2009.

Before 2009, Aston Villa v Newcastle was just another game. That all changed on 25 May 2009, when the Magpies were relegated from the Premier League at Villa Park.

As Newcastle fought for survival, a Damien Duff own goal settled the tie and ensured that they would be playing Championship football the following season. With the black and white following mourning their relegation, their misery was further compounded as Villa fans brought out the bed sheets and displayed banners mocking their fallen peers.

As manager Alan Shearer looked on, "Sob on the Tyne" and "Who is your next messiah, Ant or Dec?" banners added insult to injury for the Magpies. From that moment, there has always been something different when Newcastle and Aston Villa face off.

The next time the two clashed was at St James' Park following the Geordies' promotion back to the Premier League. Chris Hughton's revived Newcastle team hit Villa for six, picking up their first win since returning to the top flight and getting some form of revenge on the club that mocked their plight.

Since that fateful day in 2009, Villa have just one win to their name against Newcastle, but the faux-rivalry was renewed late last season.

Yet again, the Magpies travelled to Villa Park aiming for Premier League survival, this time with Rafael Benitez at the helm. Despite sitting rock bottom of the Premier League with one of the worst teams ever to grace English football's top tier, fans in the Holte End were more than happy to ridicule their friends from up north, as a 0-0 draw, combined with Sunderland's win against Chelsea, pretty much guaranteed another relegation for Newcastle.

This time, the banners read "sob on the Tyne again", but there were no tears from the travelling fans like in 2009.

Throughout the summer, both sets of fans have bantered, or clashed, back and forth about which is the biggest club in the Championship, who are the favourites to win the league and which has made the signings this summer. Ciaran Clark swapping West Midlands for Tyneside increased the bitterness between the pair.

Saturday will see two Champions League winning managers in Roberto Di Matteo and Benitez facing off. It will see one side who has settled into to life in the Championship against one that is struggling to find its feet.

It is by no means a real rivalry, but it is certainly a tie that fans now relish, with both sets of supporters dying to get one over the other.