Newcastle United have ‘fantastic players’ says Burton Albion captain John Mousinho as the Magpies look to take another step towards promotion by beating Albion on Wednesday. 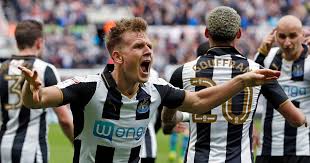 The centre-back led his side to victory over Huddersfield at the weekend - which boosted Newcastle United’s promotion charge as it expanded the gap to third to ten points.

Speaking to the Burton Mail he said: “It’s the reason we worked so hard to get promoted last season, it’s the reason we got back into pre-season this year and worked our socks off to get fit.

“It’s such a long, gruelling season and we’ve really worked to get ourselves into these positions.

“I just think the lads will be embracing it [visiting St James’ Park]. They will really enjoy going to Newcastle and testing themselves against a massive club.

While Newcastle United were partying in Milan, Burton were planning for Margate away day

“Again, we are playing Newcastle but we are not playing the club and the history - we are playing some fantastic players and players that have played at the top level.

“But I think everyone in that dressing room will relish it.”

Newcastle beat Wigan on Saturday to maintain their place at the top of the Championship with just seven games to go. Albion are four points abouve the drop zone after beating Huddersfield with a last-gasp winner from Jackson Irvine.