Toon's Biggest Loss At Anfield Since 1987 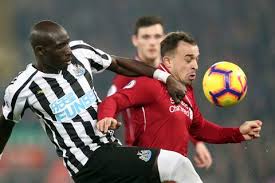 Rafael Benitez thanked both sets of fans after his warm Anfield reception. A place he holds dear.

But 'The unbeatables' tore his team apart.

The stats:-
◾Liverpool are only the fourth Premier League team to be unbeaten at the halfway stage of a season, along with Arsenal in 2003-04, Manchester United in 2010-11 and Manchester City in 2017-18.
◾This was Newcastle's heaviest league defeat at Anfield since December 1987 (also a 0-4 loss).
◾Mohamed Salah has been involved in 35 goals in 28 home Premier League games for Liverpool (25 goals, 10 assists).
◾Newcastle have now lost their last nine away league matches against the 'big six' teams and have been beaten in all six games those sides this season.
◾Xherdan Shaqiri has scored four goals in his past four Premier League matches - one more than he managed in the 20 before that.
◾Liverpool are unbeaten in their past 20 matches in December, winning their past nine in a row.
◾This was the Reds' seventh victory this month - their most in a calendar month since September 1996 (also seven).