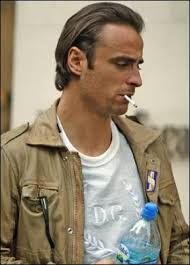 Fulham are making contingency plans for the Bulgarian striker’s possible mid-season exit after his agent admitted he was unhappy at Craven Cottage and fancied a move .

Toon owner Mike Ashley will not fund major ­signings in January but Berbatov turns 33 next month and has only six months ­remaining on his Fulham deal so would be available for around £2million.

It is well known that United will be unable to keep loan star Loic Remy on Tyneside, as he expects a host of foreign clubs to track him during the World Cup in Brazil in the summer.

And Shola Ameobi is expected to be "allowed" to move on as his contract come to an end - even though he would love to stay at the club.

The Bulgarian has long been seen as the "moodiest" player in the league, and Fulham's failings this season are largely down to him.

However, the Sunday People believe either Tottenham or Arsenal could yet join the running for his services ... although I'm sure nobody can take that seriously.

They also claim "Turkish clubs Galatasaray and Trabzonspor both want to sign Berbatov but the striker would prefer to stay in England".

The player is 33; doesn't like running; is a smoker; and has an attitude problem. Do we need him? Would Mike Ashley pay his inflated wages?

Berbatov was a £5m signing from Manchester United in August of last year but after an impressive first season at Fulham, had looked out of sorts and demotivated before Martin Jol’s sacking two weeks ago.