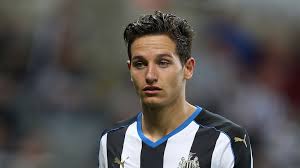 The 23-year-old moved to Tyneside from the south of France last summer before returning to Marseille on loan to spend the second half of last season.

The winger will be going back again to the Stade Velodrome for the entire 2016/17 Ligue 1 campaign.

Thauvin appeared in four of United's five pre-season friendlies, having played 16 times for Newcastle last season - five of which he started.

Marseille have an obligation to make the move permanent.