Massadio Haidara was happy to make his first appearance in the Premier League since April in the midweek defeat to Swansea, after a career-threatening injury. 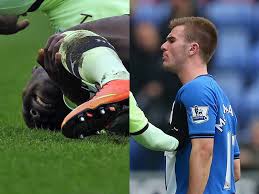 The mind games can be worse than the actual injury, fearing another 'over the top' tackle.

Haidara came off the bench in the 3-0 defeat at the Liberty Stadium after a difficult time with a number of injuries.

Haidara recovered from the McManaman challenge to figure in three games at the end of last term, but his progress has been hampered by a knee injury this year.

The Frenchman admits he was relieved to be back playing and he is determined to keep his place in Alan Pardew's plans.

Massadio Haidara: "Yes, I am relieved because it has been a very long time.

"I have not played in the Premier League since last April.

"It was a big pleasure to play again because it has been so long.

"Now I don't know the view of the coach about how I played or if I will play again, but I want to be involved and to give the team the maximum that I can."

Alan Pardew: "He's been out a long time with injuries and he's been unlucky since he's been here.

"He has a natural left foot and we think he has a big future with us. I thought he just might give us a bit of energy.

"It was good for him, and good for us that he got that period of the match."