They Didn't Put Their Boots On!

Steve Bruce says some of his players “didn’t put their boots on” at Carrow Road – which is something he can’t forgive as a manager.

Bruce’s side was convincingly beaten 3-1 by newly-promoted Norwich City at Carrow Road on Saturday. 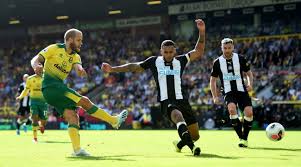 Teemu Pukki scored a hat-trick to heap more pressure on Bruce, the club’s head coach, ahead of Saturday’s game away to Tottenham Hotspur.

Bruce was critical of the team’s attitude and application in Norfolk.

Asked how he was feeling after the Norwich defeat, Bruce said: “I can't go on to the pitch with them. The one thing in management I've always tried to instil into my team is we make mistakes, but I can't forgive a performance where, basically, you don't put your boots on.

“Unfortunately, it's happened already, which is the second game in, but I'll do all I can to make sure that changes.”

Bruce called his players in for a training ground inquest into the defeat, which followed a 1-0 loss to Arsenal on the opening weekend of the Premier League season.

“I think at times like today, you need an inquest, but certainly in the next 24 and 48 hours there will be an inquest and what we can do better,” said Bruce.

“As I said, we've got to do the basics better than we did. Against a newly-promoted team, we knew what to expect in the first 15 to 20 minutes, and I thought once we got over that, can we go on and find another gear? But we couldn't all afternoon.”