The Reason Why Ashley Sacked Hughton!

When he was Toon boss, he set out his goals for the season - and the FA Cup was not one of them. 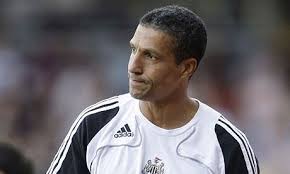 He went public, saying a cup run was not what we needed at that time, and for some reason he continues to put out a reserve side in that competition.

He did it against non-league Luton Town yesterday, and again he got what he deserves.

Yesterday Norwich crashed out of the cup ... and Canaries fans were far from happy.

Hughton felt his Norwich side did not deserve to exit the competition, defended his decision to make six changes and bemoaned the missed chances which ultimately proved costly.

"You have to give Luton credit. They came here with a game plan, we found it very difficult to break them down.

"The good chances we did have we weren't able to put them away.

"We pushed and pushed and they caught us on a classic counter-attack. It was a poor goal for us to concede.

"We never expected an easy game today. We knew they would come motivated, organised, but you expect to break them down at some stage.

"I think they have been fortunate, but that's cup football. Ultimately we weren't good enough to beat them today."

For Norwich, who are without a win in six Premier League matches and lost 5-0 at Liverpool last week, the chance to make amends cannot come soon enough. The Canaries host Tottenham on Wednesday.

Chris Hughton: "It's going to be a tough few days.

"We're in a downward spiral at the moment. We need very quickly to turn that around."

Luton produced the surprise result of the FA Cup fourth round with a 1-0 win at Premier League Norwich.

The Blue Square Premier side's victory at Carrow Road means they are only the seventh non-league team to reach the fifth round of the competition since World War Two.

Norwich were not the only top flight team embarrassed, as MK Dons won 4-2 at QPR.

Harry Redknapp, who made sweeping changes ahead of Tuesday's visit of Manchester City in the league, saw his team thrashed by their League One opponents.

QPR knocked MK Dons out in the third round of this competition last year, but Armand Traore's fourth-minute own goal and Ryan Lowe's 40th-minute effort gave the visitors control at half-time.

Ryan Harley (50) and Darren Potter (56) made it 4-0 before Jay Bothroyd and Fabio pulled two goals back inside the last seven minutes for the Premier League side.

Olivier Giroud, who netted twice in the midweek defeat of West Ham in the Premier League, repeated the feat as Arsenal won 3-2 at Brighton.

The Frenchman gave the Gunners a 16th-minute lead at Brighton, but Ashley Barnes' header levelled the scores 17 minutes later.

Giroud restored the visitors' advantage 11 minutes into the second half, only for Argentinian striker Jose Ulloa to level on his debut six minutes later.

However, Theo Walcott struck to win it for Arsene Wenger's side five minutes from time.

Manchester City booked their place in Sunday's fifth round draw with a 1-0 victory in the early kick-off at Stoke.

Pablo Zabaleta struck the only goal five minutes from time as City repeated the scoreline which won the 2011 final against the same opponents.

Yet victory may still have come at a cost for Roberto Mancini's men after captain Vincent Kompany limped off in the first half.

Neighbours Manchester United were convincing 4-1 conquerors of Fulham in the evening match.

Ryan Giggs converted a third-minute penalty before Wayne Rooney (50) and a double from Javier Hernandez (52 and 66) added to the lead. Aaron Hughes, whose handball gave away the early spot-kick, replied for the Cottagers 13 minutes from time.

Reading eased into the last 16 with a 4-0 win over Sheffield United.

Noel Hunt opened the scoring in the sixth minute, Mikele Leigertwood's long-range goal against one of his former teams doubled the advantage five minutes before the break, before Hunt and Garath McCleary made sure of the win within nine minutes of the second half starting.

There was late heartbreak for League Two Aldershot as they lost 2-1 at Championship Middlesbrough.

Danny Hylton's 89th-minute goal appeared to have earned the Hampshire side a replay but Lukas Jutkiewicz added to his 83rd-minute effort with a last-minute winner.

Blackburn were convincing 3-0 winners at Derby thanks to goals from Colin Kazim-Richards (45), Scott Dann (66) and Jordan Rhodes (71), while Chris Dagnall's goal 20 minutes from time decided another all-Championship clash as Barnsley won 1-0 at Hull.

However, Chris Wood earned a replay for the visitors with a goal eight minutes from time as the game ended 1-1.