The Man Who Will Replace Moyes!

United head into Tuesday's Champions League encounter with Shakhtar Donetsk in the throes of a crisis, following back-to-back home defeats in the Barclays Premier League.

It leaves them ninth in the table, struggling to even qualify for next season's tournament, let alone retain the championship. 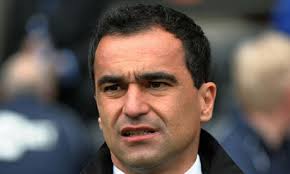 More immediately, Moyes was not even born when the Red Devils last lost three successive games at Old Trafford, in the autumn of 1962, and if it happens again United will lose top spot in Group A and be pitched into a nasty knockout-round clash with one of Europe's heavyweights.

David Moyes: "The players are hurting because they are used to winning.

"When they don't win that hurts them. They care very much about the team and the club.

"They are good lads and they will respond in the right way.

"I take complete responsibility for the results.

"It is tough because the expectancy is to win all the games and the results have not been good in the Premier League.

"There is a bit of everything we could do with doing better.

"Generally we'd like to play better. We would like to pass it better, to create more chances, I'd like to defend better when those moments arise.

"I don't think it is any one thing, it is all round we are trying to improve."

But we all know, Moyes is living on a knife edge. The Mancs are in turmoil ... and the rest of the world is rejoicing!

They won't wait the way they did with Fergie, and give him years to get it right, they will act when they feel a change is needed.

He was Fergie's prefered choice, but the Godfather is gone, and his opinion doesn't matter anymore.

It’s been a horrible few months for David Moyes. Not only are his United side languishing in mid-table but his former charges, Everton, are playing like Barcelona.

It’s ridiculous and it almost certainly won’t happen, but the Toffees are still in with a shout of not just making the top four, but actually winning the Premier League.

Roberto Martinez was never going to land the United job because Wigan were relegated last season.

But he is highlighting what an astute tactician he is with each passing week.

I watched and listened to him during the World Cup draw and he left Alan Shearer in shreds in the TV studio with his amazing knowledge of ALL 32 countries.

The history; the facts and figures; the players; how they play; their system - it was amazing.

Shearer's only contribution was "well I played in the World Cup in 1998" and that was it!

2) United like youth to be given a chance – Martinez fits the bill.

3) Give it a couple of years and there is no reason why the Spaniard cannot be in the Old Trafford dugout.