Sarah Guest, prosecuting, said Glendinning “opened up the flood gates” for two other fans to invade the pitch later in the match ... and I will be honest with you ... at the same time I was "escorted" from St James' Park for voicing MY opinion of Pardew.

I didn't get onto the pitch, but I got in the press enclosure four yards from Pardew to shout: "Pack your bags Pardew, and f*** off!"

I was taken out by two stewards, but not arrested. 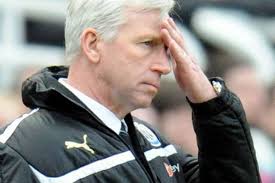 She said: “It was a pitch invasion at the derby match. The defendant has been at the match on February 1. There was a steward who was in position near the dugout. As the second goal was scored, he realised there was a member of the public running on the pitch.

“Reading from a statement from the steward, he states ‘I was standing in the usual position just as the second goal was scored and I walked out towards the pitch to monitor the crowd.

“I could see there was a male on the pitch. The male was running towards Alan Pardew holding his season ticket. He was half way across the pitch heading towards Pardew. I ran towards him to try and grab him. When I got to him, he was 5ft away from Pardew.’”

Glendinning was restrained by the steward and pulled, with the help of other stewards, towards to the south west corner of the stadium.

The court heard Glendinning soon began to refuse to walk and started accusing the steward of assaulting him before managing to break free and run off.

Continuing to read out the steward’s statement, Ms Guest said: “When I had been walking the male away, he told me ‘I came to give Pardew my season ticket because I’m sick of paying £700 to watch a display like that.’”

When the steward went back to the dugout, he found the season ticket on the floor. Glendinning was arrested shortly later.

Glendinning, who has no previous convictions, was fined £200 and ordered to pay £85 costs and a £20 victim surcharge.

He was also give a three-year football banning order, which he didn’t contest because “it would save him money”.

Ms Guest added: “It was clearly a football-related offence. It was a highly charged atmosphere on derby day and it happened around the 18th minute.

“It was clearly a hostile situation and this defendant was the first of three to run on to the pitch that day. We would say he opened the flood gates, and others followed.”

Newcastle went on to lose the match 0-3, their third successive defeat to Sunderland.