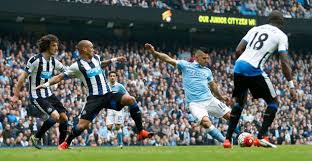 Indeed, the winger suggests those in the first team know they have to produce or they'll be dropped for someone who is more willing to put in a good display.

Newcastle followed up their 3-0 win over Swansea City with a hard-fought 1-1 draw with Manchester City on Tuesday night.

Townsend is quoted as telling Sky Sports by the Mail: "We know that if we don’t put in a good performance, there are plenty of players who can come in and replace you.

"We’re lucky we’re blessed with strength in depth in this squad so we know that if the manager rotates, the players that come in are going to do just as good a job.

"We’re still fighting and we’re still in touching distance. We’ll go to Liverpool on Sunday and try to get the three points."

Benitez has certainly turned the situation around at Newcastle and given them hope of surviving in the Premier League.

But has it all come too late?

Newcastle are now two points off Norwich City but only one of three clubs in Newcastle, Norwich or Sunderland can stay up.