Stoke boosted their hopes of a top-10 finish and increased the pressure on Alan Pardew with a 1-0 victory over Newcastle at the Britannia Stadium.

The Potters have never finished in the top 10 in the Barclays Premier League before but are now only three points behind Newcastle in ninth and four points short of their record tally of 47 points.

They needed a stroke of good fortune to seal the win, though, with Erik Pieters' 42nd-minute strike certainly intended as a cross.

It was the Dutch full-back's first goal for Stoke and his first in any competition since he played for FC Utrecht six years ago.

Newcastle have now lost four successive games, conceding 12 goals and scoring none, and there were calls for Pardew's head from the sizeable travelling support.

The visitors were boosted by the return of goalkeeper Tim Krul from injury while Stoke captain Ryan Shawcross became the first player to make 200 Premier League appearances for the club.

The hosts, watched by their biggest crowd of the season, have lost just twice at the Britannia Stadium in the league all campaign and they should have taken the lead in the 10th minute. 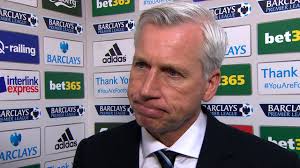 The dangerous Marko Arnautovic swung over a perfect cross but leading scorer Peter Crouch headed against a post from five yards.

Two minutes later it was Newcastle's turn to miss a golden chance as Shola Amoebi's flick found Dan Gosling in front of goal six yards out but he could only slice the ball over the bar.

Most of the pressure was coming from Stoke but Ameobi and his strike partner Papiss Cisse were causing problems for the hosts.

The latter wanted a penalty after going down under a clumsy challenge from Geoff Cameron but referee Mike Jones was unmoved.

Steven Nzonzi tried his luck at the other end in the 26th minute with a shot from the edge of the box that was deflected over the bar by Fabricio Coloccini.

Peter Odemwingie had a similar opening soon after when he was well found by Arnautovic but he miscued his shot horribly.

Then in the 42nd minute Stoke made the breakthrough, Pieters floating his cross just beyond the despairing reach of Krul.

It was undoubtedly tough on Newcastle, who tried to respond before the break through Cheick Tiote but his fierce long-ranger was well held by Asmir Begovic.

Like the first half, the first chance of the second period was a Crouch header from Arnautovic's cross, but this time the striker could not quite get over the top of the ball.

And Crouch threatened again in the 61st minute, this time with a header from Geoff Cameron's deep cross, but Krul was behind it.

Shawcross showed his value at the other end with a block from Mike Williamson's goal-bound shot, leaving the Newcastle defender with head in hands.

Charlie Adam entered the fray as a 66th-minute replacement for Ireland and wearing a mask to protect his nose, which he broke in four places in training this week.

The Scot is due to have an operation on Monday but did not want to miss the game.

And he almost made the game safe when he ran onto Arnautovic's clever pass but pulled his shot past the far post.

Begovic had been largely untroubled in the second half but Vurnon Anita spurned a great chance to equalise five minutes from time when he headed Ameobi's cross over an empty goal.

Boos from the travelling fans greeted the final whistle, with a 'Pardew Out' banner displayed.