The quarter-final tie is Newcastle’s biggest League Cup date since 2006 – when they lost to Chelsea.

League Cup rules state that United can claim up to 15% of the capacity at White Hart Lane for the last eight clash.

Alan Pardew (talking to the Chronicle): “I hope they give us a good allocation because we will fill it up.”

Newcastle have only appeared in the League Cup final ONCE in their history, when they lost to Man City 2-1 back in 1976. 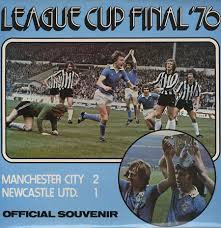 Geordie boy Dennis Tueart gets the cup in a Toon shirt

28 February 1976 we went to Wembley, two years after that humiliation against Liverpool in the FA Cup.

In 1974 Supermac told us he would be bringing back the trophy, and we believed him. But John Tudor told me many years later: "We went down to London early in the week and it became one long party.

"Liverpool came down on the Friday night, went to Wembley, stuffed us, and buggered off back to Liverpool with the cup.

"Professional, cut-throat, and always in focus. And that was a major lesson to us."

The League Cup final was different. Manager Gordon Lee saw his team hit by flu and nobody promised us anything. It was going to be backs against the wall, dig deep, and give 110% ... and that's what happened.

But it was the ONLY time in the four Wembley finals I have seen (Liverpool, Man City, Arsenal and Man Utd ... and FIVE if you include the Man Utd Charity Shield) that I REALLY believed we were going to win.

Alan Gowling scored, and that moment will live with me forever.

It was the sixteenth final and the tenth Football League Cup final to be played at Wembley. Manchester City won the match 2–1 to win the competition for the second time in their history, and we have never been closer to winning it ever since.

The match is best known for its winning goal, an overhead kick by Newcastle-born Dennis Tueart ... and he even walked the 39 steps to pick up the trophy wearing a Newcastle shirt.

The match could have been a north-east derby, as Middlesbrough won their first leg against City in a two-leg semi-final.

City made a slow start to their cup run, the second round tie against Norwich City went to two replays, Manchester City winning the second replay 6–1 at Stamford Bridge.

A 2–1 home win against Nottingham Forest in the third round set up a Manchester derby against local rivals Manchester United. City beat their neighbours 4–0 to reach the quarter-finals. A 4–2 win against Mansfield Town secured a two-legged semi-final against Middlesbrough.

City lost the away leg 1–0, but a comfortable 4–0 win at Maine Road took them through to the final.

This was Newcastle's first (and only) League Cup final appearance. Their previous best in the competition was reaching the quarter finals, achieved the preceding season.

Their 1975–76 League Cup campaign started with a 6–0 demolition of Fourth Division Southport in the second round.

Newcastle required a replay to overcome Bristol Rovers in the third round, and then beat Queens Park Rangers 3–1 at Loftus Road to reach the quarter-finals.

A 1–0 win at home to fellow Magpies Notts County secured a semi-final against Tottenham Hotspur.

The first leg of the semi-final resulted in a 1–0 defeat, but Newcastle overcame the deficit in the home leg by winning 3–1.

Manchester City fielded a line-up unchanged from their previous match, a 3–0 home win against Everton in the league.

Colin Bell was absent through injury, having suffered what later transpired to be a career-ending injury in the fourth round derby.

Dave Watson was an injury doubt due to a slipped disc, but was selected despite his inability to train in the preceding week.

Newcastle's Glenn Keeley fouled Joe Royle in the middle of the Newcastle half. The resulting free-kick was hoisted into the penalty area by Asa Hartford, where it was headed across goal by Mike Doyle. Teenage winger Peter Barnes then scored to give Manchester City the lead.

After the match Tueart described the goal as "the greatest of my career".

No more goals were scored in the match, though Royle had an effort disallowed. City captain Doyle lifted the trophy, and Tony Book became the first man to win the competition as both a player and a manager.