According to The Daily Star, Middlesbrough Chairman Steve Gibson is set to announce the club’s new manager by the end of the week. 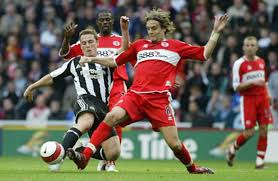 Middlesbrough have been without a manager since Tony Pulis parted ways with the club three weeks ago. The Welshman was not offered a new contract after failing to secure a top six finish and reach the Play Offs.

The report from The Daily Star centres around recently released Middlesbrough winger Stewart Downing, who will wait until a new manager is announced at his home town club before making a decision on his future.

If Woodgate is announced as new Boro boss there is a good chance Downing could re-sign on the dotted line for the Teessiders. The pair are very good friends outside of football, and have a good working relationship, and the article states Woodgate is prepared to offer Downing a new deal if he becomes the man in charge.