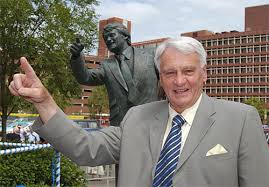 The Sir Bobby Robson Park in Langley Park, County Durham, where the former Newcastle United and England manager grew up, opened about seven years ago at a cost of around £200,000, after winning £80,000 in funding following a popular vote on ITV’s People’s Millions TV show.

But Esh Parish Council has closed the well-used and much-loved community facility, placing a sign on the front gates saying: “This park is closed for repairs due to vandalism (health and safety). Trespassers will be prosecuted”.

It is understood the park, which has swings and climbing equipment for younger children and a skate park for teenagers, has suffered repeated incidents of vandalism over recent months.

Esh county councillor Joe Armstrong said it was “very upsetting” that someone would damage a park linked to Langley Park’s favourite son.

“It’s very upsetting for the community that we’ve got people in the village who are so mindless and spoil things for everybody else,” he added.

However, the parish council intends to have the damage repaired and reopen the park as soon as possible.

Cllr Armstrong said: “We’re not going to run away from it. We’ll get it repaired and keep an eye on it.”

A Durham Police spokesman said the force had received a rise in reports of incidents of anti-social behaviour and criminal damage in the Langley Park area in the last month and had responded with “targeted officer patrols”.

An 18-year-old man has been arrested and charged with common assault and criminal damage to buildings and vehicles. He is due to appear before Peterlee Magistrates’ Court on Tuesday (April 12).

The police spokesman added: “Enquiries are ongoing and further arrests are anticipated.”

To report a crime, call Durham Police on 101.

Sir Bobby Robson was born in Sacriston in 1933 but moved to Langley Park at just a few months old. The Italia 90's charity Foundation has raised more than £9m to fight cancer.