Shola Backs The Mags To Stay Up 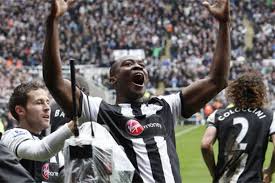 Ameobi, now 34, joined Newcastle way back in 1995, having moved to the North East from his native Nigeria at the age of just five.

The striker came up through the ranks with the Magpies, and ended up making almost 400 appearances for the club, scoring 79 goals in the process as he became something of a cult hero on Tyneside.

Since being released at the end of the 2013/14 season, Ameobi has played for Gaziantep BB in Turkey, before returning to England with Crystal Palace, Bolton Wanderers and now League One side Fleetwood Town.

Now, Ameobi has looked back at his former club, having spoken to ITV about Newcastle's fight against relegation from the Premier League.

The Magpies lost 5-1 away at Chelsea last weekend, and sit level on points with 17th placed Norwich, with the pressure mounting on manager Steve McClaren.

Ameobi admits that he's worried for Newcastle's Premier League status, but is of the opinion that they do have enough quality to avoid relegation this season.

"It's very disappointing as a fan," said Ameobi. "That's what I am, first and foremost. I want to see my hometown do well and it's obviously worrying times at the moment."

"But you've got to continue to have faith and belief that the guys can pull it out of the bag. They've certainly got the quality to be able to do that and I just hope that's the case," he added.