Shelvey Out? Does It Matter? 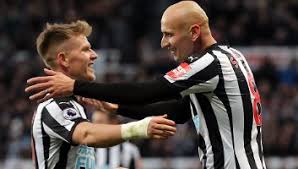 Jonjo Shelvey is doubtful for Newcastle United's visit to Stamford Bridge, according to a report.

But, as he hasn't been a regular all season because of a fall-out with Rafa, it is hardly the end of the world.

Shelvey will reportedly travel to Barcelona this week to see a specialist about a recurring thigh injury.

The problem, which has plagued Shelvey over the past two months, flared up after he came off the bench against Blackburn Rovers at St James's Park on Saturday, according to the Daily Mail.

Shelvey has struggled for form and fitness this season.

And it is claimed that Shelvey "could miss more games than he plays between now and May".

United manager is already without midfielder Ki Sung-yueng, who is away at the Asian Cup.

Newcastle, 15th in the Premier League, take on Chelsea on Saturday.