At times you wonder why Jonjo Shelvey is so readily cast aside as a former England player, just as much as you wonder whether team-mate Kenedy will be a future Brazil star. 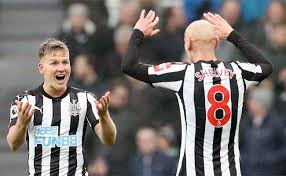 There may be questions over Shelvey's temperament - his two red cards outnumber his one goal this season - but his commitment and class are not in doubt.

On Monday of last week, Newcastle boss Rafa Benitez had as good as ruled him out of Saturday's visit of Southampton, the midfielder having come so close to season-ending knee damage in a collision with his own goalkeeper last month.

But Shelvey took to the training pitches and started running. In fact, he did not stop running all week in an effort to prove his fitness to a cautious Benitez.

The irony, of course, is that Shelvey does not need to run at all to be at his most effective - afford him possession and he will make the ball do the hard yards for him, even if he does make it look easy.

How many of England's current midfielders have a range of passing as extensive as Shelvey? Answer: none.

Gareth Southgate names his latest squad this week, perhaps he should give a belated World Cup audition to a player whose artistry and imagination is in stark contrast to the conservatism of a central midfield which has, on recent occasions, comprised of Jake Livermore and Jordan Henderson.

Two of the five chances Shelvey created on Saturday resulted in goals, the first for Kenedy after just 63 seconds and then for Matt Ritchie before the hour.

He walked off to a standing ovation eight minutes from time - he had given his lot and then some more - and Benitez will be hoping that three weeks until their next match allows him to rest. Shelvey won't, he wants an England recall nearly 30 months on from the last of his six caps.

Benitez, who takes his squad to Spain later this week, said: 'Jonjo was pushing, he was desperate to play and credit to him, he did very well. In another case, another player maybe would not play, but he decided to take the risk and that was very positive for us.'