Alan Shearer was desperate for one of his best mates to NOT take the Newcastle United job this summer. 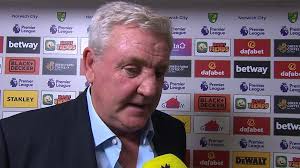 The NUFC legend telling Steve Bruce that for all kinds of reasons it was a chance that should be turned down, particularly because of Mike Ashley’s ongoing presence.

But the performance against Norwich was SHOCKING!

Alan Shearer stating: ‘Before the season, I thought there might be three worse teams than Steve Bruce’s side.’

However, after watching these opening two defeats and NUFC already in the relegation zone, he now says ‘I think relegation is a real possibility.’

“I am really worried about what I have seen so far from Newcastle and I think relegation is a real possibility.

“Before the season, I thought there might be three worse teams than Steve Bruce’s side.

“But on the evidence of two matches, I’m definitely concerned.

“Against Norwich, Newcastle were also all over the place defensively and they got what they deserved, a hiding.

“Rafa Benitez’ strength when he was in charge was making the team well-organised and, at times, difficult to beat.

“But at Carrow Road, Newcastle were very poor defensively, had no creativity in midfield and there was nothing up front.

“At the moment, there is no partnership at all between Joelinton, who is now injured, and Miguel Almiron.

“They are playing as individuals. Almiron needs to realise he is a forward, or be put on the wing.

“I understand he wants to do his bit defensively and help the team but he needs to let others do their job and get forward so he can cause damage.

“Almiron has started 11 games and there is a reason he hasn’t scored. He seems to want to stay deep and get the ball and run, not get in the box.

“Things are getting no easier for Newcastle as they play Tottenham away next week.

“Whether you like it or not, there is a war going on between the owner and the fans and I totally understand why fans are frustrated, I’ve been as vocal as anyone against the owner.

“That being said, it is not helping anybody and there are a lot of people caught in the middle of it, including Bruce.”