Scousers Could Be Crying At SJP 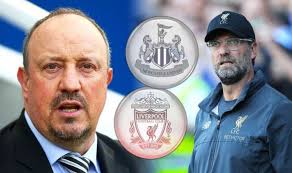 And Rafa Benitez and Brendan Rodgers' previous allegiances to Liverpool have sparked the suggestion that the former managers might be in some way partial to helping out the Reds' title bid.

Rodgers has already dismissed the notion of helping Liverpool out and now Benitez has also offered his take on the title situation by providing comments which Man City fans will surely love.

"We will do what we have done the whole season and that’s try to win the game," Benitez said. "We play at home in front of our own fans and will try to do our best.

"It’s my responsibility to look after Newcastle and if I was on the other side, I would be expecting the opposition to do their best and the manager to try his best."

Liverpool will host Wolves and Man City are away at Brighton at the same time on the last day of the season ... but if Newcastle beat Liverpool, and City beat Leicester, the title is over.