Rondon - Scoring Goals Is My Job 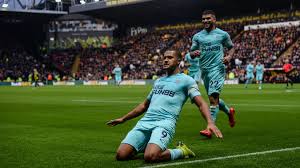 Man of the moment Salomon Rondon has insisted Newcastle United ARE up for the fight in the Premier League's relegation dogfight.

The Magpies yielded just one point from six over the festive period and after both Fulham and Cardiff City won crunch games at the weekend, they are still very much considered candidates for the drop.

Rondon now has six goals to his name in all competitions, but his top flight efforts are currently the reason why Newcastle aren't in the bottom three.

Speaking after scoring a well-taken header at Watford, Rondon said: "It was a shame we conceded so late in the game because we had fought hard and we were in front for most of the game.

"But it's still a massive point for us because it shows we are ready to fight.

"Watford play with a high intensity at home and we worked so hard to contain them.

"The most important thing is the spirit, and that was never missing.

"Leading the line and scoring goals is my job, and I know the manager and the fans are looking to me to help the team win games, but we have to keep working as a team and this is a small step in the right direction."