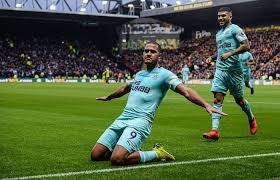 The Magpies go in against Manchester United to kick off 2019 but will be underdogs against Ole Gunnar Solskjaer's side.

Salomon Rondon, though, is eager to take on the Red Devils, he said: "Every game in this league is difficult but this one is like a final because you are playing against great players.

"We need to stay compact and focused, keep our spirit and attitude, and remember we are playing in front of our fans.

"This is our home and we want to do well here.

"In the past teams have feared playing United, and maybe you think about their history, but they are the same as us – two arms, two legs – and we will do our best to take three points."

Newcastle players can at least take some confidence from their display at Old Trafford earlier in the season when they stormed into a 2-0 lead before losing narrowly.

But Rondon warned that this is a different Man United team with a rejuvenated attitude.

He added: "We played well at Old Trafford this season, and a lot had happened since that game.

"Their confidence is high because they have enjoyed a couple of good wins, but the most important thing is how we approach the game.

"It's about how we look after our team-mates, how we play as a team, and to play with the spirit which helped us to go on the run which lifted us up the table.

"We know we can do it. This is the challenge."