Rafa's 'How To Win The League' 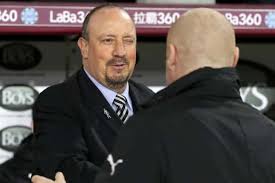 Office workers up and down the country will soon be wondering what to get colleagues in their Secret Santa draw and getting the boss is a daunting task, but Peter Crouch seemed to manage it brilliantly.

The build up to Christmas though will be dominated by trying to work out what in the world to get all those people that are difficult to buy for, usually it's family but picking a colleague's Secret Santa gift might be hardest of all.

Colleagues is one thing though but the ultimate difficult decision is what to get your boss once you've pulled their name out of the hat. Just how far with the banter can you go?

Of course it's no surprise that Peter Crouch nailed his Secret Santa gift to boss Rafa Benitez back when both were at Liverpool. Talking on his BBC Sport Podcast, That Peter Crouch Show, the 37 year old explained what he got Benitez, saying:

"Funnily enough, I drew my boss once at Secret Santa, and it was Rafa Benitez!

"I was at Liverpool, yeah, I genuinely did. It was no limit so we went all in.

"What I got for Rafa was... you know he started changing his image a little bit, and he started wearing a leather jacket. The goatee era.

"So I got him a new leather and I also got him Jose Mourinho's book, and it was 'Jose Mourinho: How to win the league'.

"I thought 'this is not going to go down well!' And he had a look at it. He opened it up and he just said 'oh!'

"He was actually genuinely interested. 'I'll read that yeah!'

Benitez and Jose Mourinho were entrenched in a big rivalry as Liverpool and Chelsea seemed to constantly face each other in big matches at the time, including the infamous ghost goal game in the Champions League.

The former Valencia boss did well to react so nicely to the gift, you'd imagine Mourinho probably wouldn't be so humble if he received a book by Benitez.