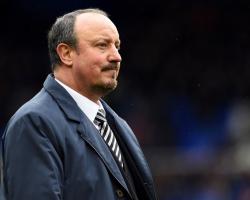 The Magpies will be promoted at the first time of asking if they beat Preston at St James' Park on Monday evening, and still have an outside chance of overhauling Brighton to snatch the Sky Bet Championship title.

However, the ever pragmatic Benitez insists he does not care if they are promoted in first or second place as long as they go up.

He said: "My target was always to try to go up

It doesn't matter to me the position, so the main thing is just to make sure we finish our job.

"I am sure that everything is fine if we go up

In six months' time, nobody will remember if we won or lost any games, just that we were promoted, that was the target.

"I always talk about experience and in this case, stats and history if you want

In the last five years, you haven't had too many teams going straight up - just one, so that shows how difficult it is for the teams who were relegated."

The Easter weekend left Tyneside bathed in anxiety after Newcastle surrendered two points to Leeds at the death on Good Friday and were then soundly beaten at Ipswich three days later.

However, defeats for Huddersfield and Reading on Saturday mean one win from their remaining three fixtures will be enough to clinch promotion, and Benitez is in no mood to extend the agony.

He said: "It's just so simple: it depends on us and if we work hard and play well and we are a little bit lucky sometimes, we will be there."

It will be the third meeting between the sides this season with the Magpies having trounced Preston 6-0 in the EFL Cup at St James' and won 2-1 in the league at Deepdale with Aleksandar Mitrovic scoring twice in both games.

Lilywhites boss Simon Grayson is looking for a response to a run of three successive defeats.

He told PNE PlayerHD: "They need the points to get over the line and get back into the Premiership but we will take heart from what we have done and the good results we have had throughout the season.

"But the players have to show determination to be better and harder to beat than they have in the last three games."