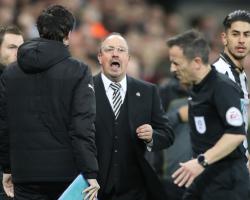 Matt Ritchie had a penalty ruled out after half an hour in controversial circumstances that briefly threatened to derail the Magpies' push for the title.

Referee Keith Stroud awarded Burton an indirect free-kick rather than ask for the spot-kick to be retaken after Dwight Gayle dashed into the penalty area before Ritchie struck the ball.

Rules of the game indicated Newcastle should have been allowed a second chance from 12 yards, and referees' body Professional Game Match Officials Limited (PGMOL) confirmed Stroud had made an error.

But with Newcastle going on to collect the three points, Benitez could afford to concentrate on the Ritchie goal that did count.

The winger struck a stunning winner with 22 minutes remaining as Newcastle pulled 10 points clear of the play-off places.

Benitez said of the penalty controversy: "You have seen the incident, you have a lot of experts to analyse, I was talking to the referee

I will not keep talking about that.

"For me it was an important game, a fantastic goal from Matt Ritchie, a great goal

There was work rate, a lot of positives and unfortunately we talk about the incident.

"The referee and me have been talking

We need to move forward

We can't change what happened

We got three points

After the incident we were losing our focus

We needed to make sure there was no mistake

We did it until the end and we couldn't be relaxed."

A statement from PGMOL said Stroud had apologised for his mistake.

"In the Championship game between Newcastle United and Burton Albion, referee Keith Stroud awarded Newcastle a penalty in the 29th minute," the statement read.

"As Matt Ritchie took the kick, Dwight Gayle encroached in the penalty area

An indirect free-kick was awarded to Burton, but the Laws of the Game state that that the penalty kick should have been retaken.

"Unfortunately, the referee has misapplied the law

Keith and his team are understandably upset at the lapse in concentration and apologise for the mistake."