Rafa To Face The Blue Mob

Rafa Benitez has won only one of his 14 away matches against Chelsea in all competitions (four draws, nine defeats), a 1-0 victory with Liverpool in the Premier League in October 2008. 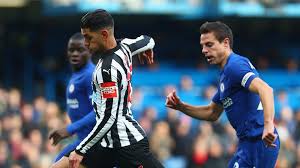 As the cherry on the top of the icing on the very top of the cake, the Chelsea fans will as usual, give their former manager grief.

Fair enough he might not have been the most popular choice, but when Rafa Benitez agreed to step in mid-season with the club in chaos after the sacking of Roberto Di Matteo, and then led them to a Europa League trophy win and Champions League qualification, you would think at least Chelsea fans would in hindsight have grudging respect for the job he did, you’d be wrong.

Mark Lawrenson thinks Rafa Benitez will enjoy what happens on the pitch about as much as he enjoys is reception from the Chelsea fans.

Chelsea ave scored far less (38) goals than any other club in the top six and are reported to be desperate to bring in a new striker.

The last three weeks have seen both Leicester won (1-0) and Southampton (drawn 0-0) go to Stamford Bridge and keep clean sheets, Newcastle you feel will almost certainly have to do the same if they are to get anything, as only Huddersfield have scored less than Newcastle’s 15 PL goals.

“Newcastle manager Rafael Benitez got a great welcome at Anfield when he went back with the Magpies over Christmas.

“But I don’t think he will get the same sort of reception on Saturday at another of his former clubs.

“Sadly for Benitez, I can see him being on the wrong end of a similar result – although I do not see Chelsea hammering Newcastle the way that Liverpool did.

“It looks like the Blues are going to get a new striker in January, we just don’t know who it will be yet.

“They need one because they have been a bit short of goals recently but, in the meantime, I still think they will be too strong for the Magpies.