Rafa: 'This Will Give Us Confidence'

A crowd of 50,861 had turned up expecting Rafael Benitez to make it difficult for City to close the gap on leaders Liverpool, but for the visitors to do it just the same. 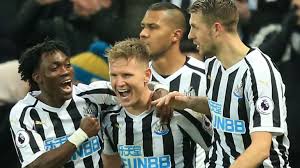 The locals arrived too ready to vent their collective spleen at Magpies owner Mike Ashley and his running of the club, with talk of a takeover now all but dead and the January transfer window proving as frustrating as those which have preceded it.

However, as kick-off approached, news that a club record deal had been struck to sign Atlanta United’s Paraguay international playmaker Miguel Almiron emerged and, with progress being made too on Monaco full-back Antonio Barreca, was greeted hopefully, if with caution.

The mood change somewhat when Sergio Aguero fired the visitors into the lead with just 24 seconds on the clock, but Salomon Rondon’s 66th-minute equaliser set the stage for Matt Ritchie to snatch an unlikely victory from the penalty spot with 10 minutes remaining and put a smile back on Benitez’s face.

He has cut an increasingly frustrated figure in recent weeks and it remains to be seen whether the club has shown enough ambition to persuade him to extend his own stay on Tyneside.

In the meantime, he will focus purely on his rescue mission, if with an extra spring in his step.

Benitez said: “This one is an important game for us because it will give us more confidence, but the main one will be the last one when we get the points to stay up, that’s it.”