Benitez was criticised for his unadventurous approach in the loss to Chelsea in their previous league game, where they had just 19% possession, and they fared only slightly better with 21% against City. 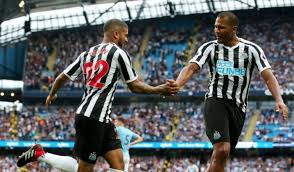 And as in the defeat at Stamford Bridge, they failed to hold out after equalising, with summer signing Rondon cutting an isolated figure for much of the game.

Defeat could have been much worse had it not been for goalkeeper Martin Dubravka, who stopped well from Gabriel Jesus and made an excellent double save to deny Fernandinho and David Silva.

Benitez told BBC Sport: "I am really pleased with the effort, mentality and team spirit. We were in the game for a while. We gave the ball away or the first and the second was a great goal.

"It is the same situation for us, we have to improve on the ball and we would have more chances against these teams.

"I am pleased to see the support of the fans and the way players were working. That is the main thing to have everyone together.

"We cannot be watching the table, it is too early. The main thing is the performance. We are not too far away, as soon as you start with a couple of victories you can go up."