Newcastle fans once again made their thoughts clear - with owner Mike Ashley in attendance at Craven Cottage. 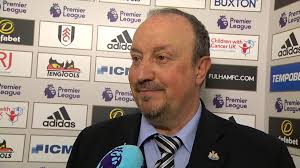 For the second successive season finale, Benitez walked out on to the turf at the final whistle with a smile wider than the mouth of the Tyne.

It was mission accomplished after another campaign in which his side flirted with the relegation places. Aside from unanswered questions over his own future there remains the unresolved issue over whether the club will sign 12-goal striker Rondon on a permanent deal.

The Venezuelan and Perez have combined brilliantly in the second part of the season to lift the Magpies away from the scrap to avoid the drop. However, it was Shelvey, a less influential fixture this season, who set the visitors on their way with a exceptional strike which flew past the reach of Sergio Rico.

Soon after the restart Perez, arguably Newcastle's player of the season, tapped in his sixth goal in five games after the ball from Atsu's blocked shot came back to him.

Schar, who will be remembered for his 25-yard cracker against Burnley, headed in his fourth of the season after the break before Rondon rounded off a fitting climax for himself and his team in the 90th minute.

Benitez added: "This group of players from beginning until the end have worked really hard. We never gave up, even when we were safe in the last three games they were still giving everything.