Jamie Carragher says that Rafa Benitez will “not quit” and is playing a political game at Newcastle to earn more transfer funds and improve his bargaining position with owner Mike Ashley. 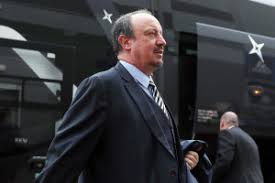 Carragher knows Benitez as well as anyone in the English game, having played under him at Liverpool and witnessed the power struggles on Merseyside that eventually resulted in his departure.

“He won’t quit. He never quits. That is something Newcastle United fans should remember as another storm starts to blow around Rafa Benitez.

“It should have been a week of celebration on Tyneside, the club having secured an immediate return to the Premier League, but instead a group of supporters who have so often had to endure disappointment find themselves confused by the uncertainty that has followed.

“Benitez has indicated he will only stay on at St James’ Park next season if he feels that Mike Ashley, Newcastle’s owner, shares his vision for what is needed to be successful back in the top flight but he is confident that ‘everything will be fine’.

“Watching the episode unfold brought some memories flooding back. Everything I’ve seen and read in the last few days had me thinking of many things, from our time together at Liverpool. He had three different sets of people to answer to at Anfield and fell out with them all.

“Rafa is an excellent manager and one of the biggest influences on my career — perhaps the biggest in terms of actually being on a pitch. I played my best football under him and many of the things he taught me I still bring in to practice, whether it is on these pages or with Sky.

“But he is, without doubt, the most political figure I’ve come across in football. I saw what is going on at Newcastle happen at Liverpool. It happened at Valencia, too, where he famously said he ‘asked for a sofa and they gave me a table leg’ during a row over transfers.

“This posturing has a purpose. Benitez wants the maximum amount of money he can get ahead of the transfer window in order to keep Newcastle competitive. If he doesn’t get the funding that he feels is necessary and next season goes badly, he can turn around and say: ‘I told you so.’

“He raised the prospect of leaving Liverpool many times, suggesting he could go to Real Madrid, Juventus, Bayern Munich and even England! He seems almost as popular in Newcastle as he was at Anfield. He aligns himself with the fans and they are hard people to walk out on.

“I’m sure the soundbites will continue and the sense of drama will heighten but this is part of the Benitez package. People talk about managers having certain styles and philosophies... well, Benitez manages by conflict. Look right through his career and you will see it everywhere.

“From his time coaching the youth team at Real Madrid, where he clashed with director Jorge Valdano over the selection of certain players, conflict has followed him. At Liverpool and Valencia, that method brought him great success.”

“I’ll come back to the issue of being sacked in a minute but, for a moment, there is one critical question that needs to be answered, when you think about the possibility of him resigning: where exactly is he going to go?

“What job in the Premier League outside the elite is bigger than Newcastle? At this moment, I find it difficult to see any of the top six clubs taking him. So what else is out there? Maybe West Ham if Slaven Bilic were to leave. But would that represent a bigger step up than Tyneside? No. He is working at a club with a brilliant stadium and a huge fan base that has potential. He is also being handsomely rewarded for it.

“This, though, is a dangerous game he is playing. Ashley has been subjected to huge amounts of criticism during his period of ownership but if he feels Benitez oversteps the mark, have no doubt that he will fire him.

“Why wouldn’t he? Ashley wasn’t afraid to axe club legends and local heroes Kevin Keegan and Alan Shearer, so why would he think twice about pulling the trigger on Benitez? You don’t amass the business portfolio and personal fortune Ashley has by shying away from big decisions.

“Newcastle fans don’t like Ashley. There have been disastrous appointments, such as Dennis Wise and Joe Kinnear and a fiasco with the renaming of the stadium but he isn’t bothered about being popular with them.

“So if Benitez continues to challenge him through the Press — there was an episode in January, remember, when he never got his wish to sign Andros Townsend — you could see it ending only one way: with Ashley deciding enough is enough and Rafa getting sacked.”

“Yet the thing is they both need each other right now. Rafa is back working in the Premier League, the domestic competition he loves more than any other, and Ashley has a manager who represents his best chance of winning a trophy.

“It should not be forgotten that there are few better managers in world football than Benitez in preparing a team tactically for a one-off game and there is no reason why Newcastle cannot win, for instance, the League Cup under him.

“Ashley, ridiculously, has never regarded cup competitions as being important to Newcastle even though they haven’t won anything domestically since 1955 but Benitez excels in them and — with the exception of Real Madrid — has won silverware at every club he has managed since Valencia, including Napoli and Chelsea.

“He has met his target for the year, which was to secure promotion for Newcastle, but that was to be expected, given the money they laid out last summer to buy players such as Matt Ritchie from Bournemouth.

“But the thing with Rafa is he always wants more. And that is why the agenda that has been set this week, from talk of ambition and transfers and net spends, will continue until the day this chapter in his career reaches an end.”