Rafa On The England Coaches Job

Rafael Benitez has admitted it could be easier for an Englishman to secure the England manager's job than one with a top-six Premier League club. 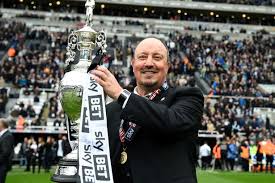 Allardyce followed in the footsteps of Roy Hodgson and Steve McClaren, who were separated by Italian Fabio Capello's reign, with Kevin Keegan's departure in October 2000 prompting a first-ever appointment in the overseas market with Sven-Goran Eriksson.

However, with the country's top clubs all being managed by foreign coaches, Spaniard Benitez acknowledges that the England job could be less difficult to secure.

The Newcastle boss said: "The England manager's job is a difficult job, but you have more chances to get the job because you are English.

"The top six jobs, it is different because you have foreign owners spending a lot of money, and what they want is the best. That doesn't have to be English, just the best.

"In England, I know you talk about having an English manager. You have four or five options and it is easier than getting a job in the top six.''