And the bookies said Rafa would be the first to go! 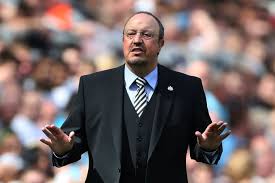 Frank de Boer has been sacked as manager of Crystal Palace, the club have announced.

The club have acted after the Dutchman oversaw four top-flight defeats from the start of the season, making them the first team in England's top division to do so without scoring since Preston 93 years ago.

Palace are Sky Bet's 6/5 favourites for relegation, who eased Brighton to 6/4 following their first Premier League win at the weekend.

"We would like to thank Frank for his dedication and hard work during his time at the club.

"A new manager will be appointed in due course and we wish Frank the very best of luck for the future.

"There will be no further comment at this time."

Despite an improved performance in Sunday's 1-0 defeat at Burnley, whose goal was gifted to Chris Wood after an awful back-pass from Lee Chung-yong, Palace felt a new appointment was needed ahead of a difficult run of fixtures.

On Saturday they host Southampton before league games against Manchester City, Manchester United and Chelsea in the coming weeks. De Boer had overseen losses to Huddersfield, Liverpool and Swansea prior to the latest setback at Turf Moor. De Boer's only competitive win came against Ipswich in the Carabao Cup.

His departure from the club follows a similarly short stint at Inter Milan, who sacked him only 85 days after his appointment.

The 47-year-old had been at Selhurst Park for only 77 days after succeeding Sam Allardyce, and while that remains longer than the shortest term for any Premier League manager - Les Reed's 40 days at Charlton - he oversaw two fewer games.

Amid his disappointing results he also had little good fortune. Wilfried Zaha has been injured since the opening day of the season, while the equally promising Ruben Loftus-Cheek was unavailable to play on Sunday.

Similarly to Lee's back pass, in last month's 2-0 home defeat by Swansea, the game was goalless when James Tomkins suffered an injury shooting on goal, and his replacement Martin Kelly significantly contributed to the visitors' goals.

Press Association Sport also understands, incidentally, that Hodgson had been approached about replacing Alan Pardew when Allardyce was appointed last December. The 70-year-old has been out of management since resigning as England manager after their elimination by Iceland at Euro 2016.

In response to criticism following the Burnley defeat, club chairman Steve Parish wrote on Twitter: "People are frustrated, I'm frustrated, so are the management and players. We know we are better than this...

"We are four games in, it's a terrible start but we have to stick together."

De Boer had said after the loss at Burnley: "I am disappointed about the result but I am not disappointed about how we played. This is the starting point, because usually if you create that many chances against any opponent you will get what you deserve.

"What we showed gives us a lot of hope for the future.

"I am just focusing on what I can control and so are my staff and my players. (The future) is for other people to decide but while I'm the manager of Crystal Palace I will give 100 per cent."