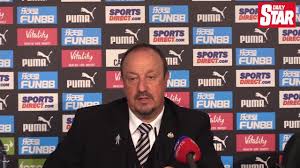 The Newcastle United boss compared his start to the Premier League season to his last two - and there's a clear lesson to be learned.

Rafa Benitez says that his Newcastle United players must look back on the previous two years to realise what their start means.

Newcastle have begun the season with a narrow defeat at home to Tottenham Hotspur and a goalless draw away at Cardiff City - although a stoppage-time penalty should have given them the three points.

One point from their opening two fixtures isn't exactly fantastic, but Benitez is sure that it's only positive.

“To be fair, you don’t analyse what happens in the past too much. But it’s true; we lost two games in the Championship and then won the league. We also lost the first two last year and finished 10th,” said Benitez told the Newcastle Chronicle.

And so one point from two fixtures actually represents Newcastle's best start to a new season under Benitez - and the last two went on to be overwhelmingly positive, so why not this one?

Still, the Spaniard had a message for his team after the draw with Cardiff, a game that saw them go down to 10 men after Isaac Hayden was sent off.

“No, I don’t think the players lost control," said Benitez.

"I just think this was a game at the beginning of the season, which is always more difficult. Especially when you have done well last season, you, as players, need to realise that everyone is stronger.

“Other teams have spent a lot of money on players so it’s a new competition and we have to reach the same standards, if not higher, again.”