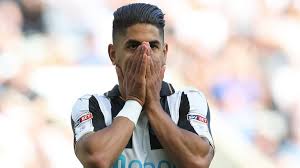 A lot of questions asked after yesterday’s match but for me, the biggest one was how Ayoze Perez was still on the pitch at the final whistle.

I can’t say I’m the Spaniard’s biggest fan anyway, he certainly has ability and has moments of magic, but he is very much a player without a clear position and we see his ability/magic moments very rarely.

Against Wolves, Ayoze Perez was appalling, though he was in good company.

Playing on the left he was barely in the game and his one big moment saw him get his shot on target when the game was still goalless – but he should have scored from 14 yards out, the keeper making a decent save, with what was Newcastle’s best chance of the first half.

However, it was the second half that saw Perez’ performance hit rock bottom.

Caught in possession 15 yards outside the Newcastle box, it was embarrassing to see him on his knees with his arms outstretched to the ref for a non-existent foul, as Costa strolled away and curled the ball past Sels.

Worse was to come though and I’m guessing only because it didn’t lead to yet another Wolves goal, has Ayoze Perez avoided deserved criticism and ridicule.

With Newcastle two down, the least the fans deserved was total commitment for the final half hour.

At two down the ball was played by a Wolves central defender to a teammate in the right-back position, around 10 yards outside his own box.

The Wolves player with Ayoze Perez in attendance, simply put his head down and started running. He got a yard or two past the Spaniard and kept on going, Ayoze Perez jogging after him for around 40 yards or so, without ever looking like he was going to put the effort in to catch him.

Then he did the unforgivable, he gave up.

The Wolves player allowed to stroll unhindered to the edge of the 18 yard area and fed a ball through to the centre forward, who luckily for us blazed it over when he should have scored.

Rafa only made the subs (Mitrovic and Atsu for Ritchie and Hayden) and a mystery as to why he didn’t make a third change to freshen it up, though a far bigger mystery as to why Ayoze Perez wasn’t the first one pulled off the pitch.

Hopefully Rafa Benitez will have had serious words with his countryman, I know Perez is a popular player with some Newcastle fans but the last thing we need in this Championship season is to see any player giving up on the pitch – totally unacceptable.