Pedro Sees The Glass Half FULL!

Beardsley doesn't have a bad bone on his body and if we had NO points and were heading for relegation, the former Toon skipper would still say the manager was doing a good job. 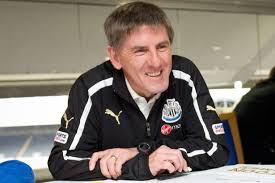 Peter Beardsley: “We have a great owner and a great manager.

“So I don’t know what the panic is. I understand it, I get that.

“But when I look at the job the manager has done, he’s done a great job.

“And I think we should just let him get on with it.”

WHAT A LOAD OF BOLLOXS!