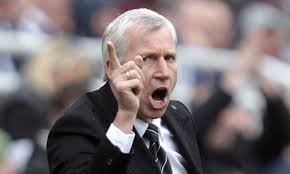 So, we threw it away. Who was to blame?

Well, as we have come to expect, it is NEVER Pardew's fault.

1) The Newcastle fans went a little bit "too crazy" after Mike Williamson put us ahead.

3) So time wasting brings with it more injury time (doesn't it?). Not according to Pardew, the referee got it wrong because he gave it!

Alan Pardew: “Our fans went crazy when we scored and we got dragged along a little bit.

"We should have closed the game out.

“Of course we wanted a fourth goal, but at that time in the game I’d prefer to have ten men behind the ball and make sure we didn’t give free-kicks away. We needed to do the dirty, horrible things Palace did all day.

“They wasted time at goal kicks and free-kicks from the first whistle.

“Time and time again, they took ages on everything, then they are 3-2 down and he (referee Mike Jones) gives them seven minutes of injury time.

“It didn’t sit right with me, but I suppose it’s the letter of the law.

"Anyway, I’m not going to bleat on about that too much, we should have won and didn’t.”