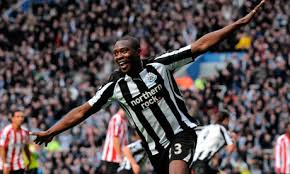 The three Premier League clubs are all keen to bring in an experienced striker and Ameobi would be available for free.

Alan Pardew signed Yaya Sanogo on loan from Arsenal but knows 6ft 3in Ameobi very well from their days at Newcastle United, while Tony Pulis is desperate to sign a centre-forward to support Saido Berahino.

Steve Bruce is also on the lookout for options up front and the lack of a fee makes Ameobi, who scored 79 goals in 397 games on Tyneside, a more appetising proposition.

He scored four goals in 11 games for Gaziantep but the club suffered financial difficulties and Ameobi cut his spell short. As he is a free agent he can join a Premier League club after the January window has closed.

Midfielders Mehdi Abeid (foot), Siem de Jong and Gabriel Obertan (both thigh) and Rolando Aarons (hamstring) are all on the comeback trail, although none are expected to make the squad for Saturday's Barclays Premier League clash with Southampton.

Victor Wanyama, Morgan Schneiderlin and Toby Alderweireld are amongst those ruled out for Southampton.

Wanyama will miss up to five weeks with a hamstring injury sustained in Wednesday's FA Cup third-round replay at Ipswich - a match fellow defensive midfielder Schneiderlin missed with an adductor strain, which also rules him out of the St James' Park trip.

Alderweireld is sidelined with a hamstring strain, seeing him join Sam Gallagher and Jay Rodriguez in the treatment room, while Maya Yoshida, Sadio Mane and Emmanuel Mayuka have international commitments.

The one-cap England international struck with 25 minutes remaining to cancel out Yoan Gouffran's first-half effort with the Saints mounting a concerted Adam Lallana-inspired fightback after failing to hit the heights before the break.

Loic Remy passed up two glorious opportunities to end his mini-drought either side of half-time, and the Magpies were made to pay with Rodriguez equalising seconds after Steven Davis had rattled the post.

The late introduction of Hatem Ben Arfa as a substitute almost did the trick for Pardew in front of an expectant crowd of 49,164, but the 52-year-old ultimately had to make do with a point on a day when he was hoping for a sixth Barclays Premier League win in seven attempts.

Newcastle went into the game in good form and brimming with confidence after last weekend's victory at Manchester United, their first at Old Trafford since 1972.

By contrast, Southampton arrived on Tyneside having taken only one point from their last four, although able to plead mitigation with Arsenal, Chelsea, Aston Villa and Manchester City their most recent opponents.

Pardew was in no danger of underestimating the visitors, with whom he spent just over a year immediately before his appointment at St James' Park, and the first half proved a tight affair.

Southampton, despite being depleted by injury, worked hard to deny their hosts space, but ineffectively at times as the Magpies broke at pace to threaten repeatedly.

Indeed, Newcastle forced three corners within the first five minutes with Mathieu Debuchy volleying just wide from the last of them after it was played out to him on the edge of the box by Vurnon Anita.

Anita had been handed the task of filling the boots of the suspended Yohan Cabaye, a big ask by anyone's standards, although with Moussa Sissoko a willing forward runner and Cheick Tiote snapping into tackles once again, Pardew's men enjoyed the better of the first half.

They should have gone ahead with 12 minutes gone when Shola Ameobi chased down Debuchy's ball over the top and squared for Gouffran to beat goalkeeper Paulo Gazzaniga to his cross.

The Frenchman selflessly picked out compatriot Remy to hand him a glorious opportunity to end his three-game wait for a goal, but his side-footed effort was cleared off the line by vigilant defender Calum Chambers.

Southampton gradually worked their way into the game, but with Jack Cork sitting deep in central midfield, their main supply lines came from full-backs Chambers and Luke Shaw.

James Ward-Prowse curled a 16th-minute effort into Tim Krul's midriff, but the traffic was largely in the opposite direction, and that was made to tell with 28 minutes played.

Debuchy's deep free-kick was headed down by central defender Mike Williamson and as the Saints defence slept, Gouffran pounced to go around Gazzaniga and roll the ball into the empty net.

Rickie Lambert blazed a 40th-minute effort across the face of goal from a narrow angle, and Anita jinked his way into the Southampton penalty area seconds later, but failed to pick out a black and white short with the visitors in disarray.

Mauricio Pochettino made a double change at the break, replacing midfielder Ward-Prowse and striker Pablo Osvaldo with Morgan Schneiderlin and Lallana, and Southampton immediately had a better balance.

Lallana's arrival gave Lambert a new lease of life as Newcastle were forced back into their own half, although the home side continued to threaten when they were in possession with Remy testing Gazzaniga from long distance with 55 minutes played.

The same man saw a speculative strike blocked by Chambers two minutes later and Ameobi headed wide from the resulting corner, but it was the visitors who were building up a head of steam.

Anita did superbly to intercept Lallana's pull-back after he had been allowed to run from halfway, and Krul was hugely relieved to see Davis' 64th-minute shot come back off the post.

But the respite was fleeting and Southampton got their reward with 25 minutes remaining when Lallana found Rodriguez and he exchanged passes with Davis before firing coolly past Krul.

The Dutchman came to the rescue six minutes later after Rodriguez had bundled a corner towards goal, and opposite number Gazzaniga had his own let-off within seconds when he served the ball up to Remy inside the box, but saw the unmarked striker fire wastefully wide.

Ben Arfa entered the fray with 17 minutes remaining and almost caught Gazzaniga out with a near-post free-kick, but there was no splitting the two sides, and tempers became frayed between the two benches after Schneiderlin's late challenge on Massadio Haidara.