An employment tribunal has ruled in favour of former Newcastle United player Jonas Gutierrez on two of the claims he brought against the club in a discrimination case.

His claims that the club gave him 'less favourable treatment' because of his cancer diagnosis, and that there was a 'failure to make reasonable adjustments' to accommodate the fact that he had cancer were both successful.

Two other claims were dismissed by the tribunal.

But Pardew took to the stands and said Jonas was dropped for "footballing reasons" when obviously he was not!

An organisation representing Newcastle United fans is calling for the club to apologise to Jonas Gutierrez.

The tribunal found that he had been dropped from the side because of his diagnosis with testicular cancer in 2013. Newcastle United say they are 'dismayed' by the outcome - and are consulting their legal team. 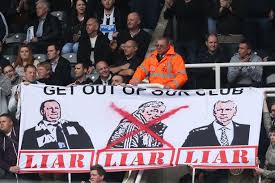 Norman Watson, Chairman of the Newcastle United Supporters Trust says a lack of apology is absolutely appalling and brings the good name of the club further into the mire.