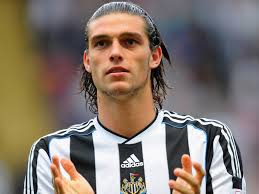 Alan Pardew (talking to the Northern Echo): "I think the Liverpool thing, for me, was a strange one.

"Big Andy's style was against the way they play.

"He's much more suited to West Ham. I think he's been a big success at West Ham, I really do. Actually, if you speak to any West Ham fans, they'll tell you that.

"The only problem is getting him on the pitch - that's been his biggest issue. If he can have a run, there's no problem with it.

"He's not just a target man, he's a good footballer and a real presence of the pitch that can win games.”