Alan Pardew (talking to the Journal): “It’s certainly been the most difficult time for me in Newcastle.

“The back end of last season spilled over into this season. We sold Yohan Cabaye and didn’t have a replacement.

“We were a bit unlucky at the start. It looked to our fans that we were in reverse. So it was tough.

“Some of the personal jibes were hurtful. You can’t disguise that, but you have to be resilient, particularly as a Premier League manager.

“You have to ride the storms. 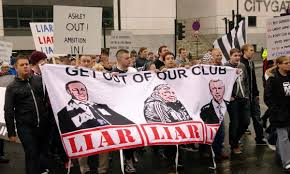 “I would never know if I was near the sack.

“There was enough in the background that I had done at the club that made the owner stick with me.

“He made me feel confident. I was confident going into the next period of games when we managed to turn it round. You just have to stay with your philosophy, believe what you do is right.

“It was much more serious than that.”