Pardew - The Mind Of A Lunatic!

Crystal Palace manager Alan Pardew has told The Guardian that he would consider jumping ship to take up the England job if he was still in charge of former club Newcastle.

Apparently the Palace job is more important to him than the England job (should anybody in their right mind offer him the job!).

But he would have jumped ship at Newcastle. Just as well he was SACKED then!

Pardew endured a strained relationship with the St. James’ Park faithful towards the end of a mixed reign in charge, a remarkable fifth-place finish in 2011-12 undermined by a number of bottom-half finishes in the preceding years.

Consequently, there appeared little love lost between the fans and the manager when the 55-year-old returned to Palace, where he spent much of his playing career, in January 2015.

Consequently, his strong relationship with chairman Steve Parish and the infrastructure and financial support provided by the club’s new American owners have convinced the former Toon boss that he should remain at Selhurst Park for the foreseeable future regardless of links with the currently vacant England role.

However, Pardew admits it would be a different story if he was still dividing opinion from his Tyneside dugout.

“When people ask me about England … well, if I was still at Newcastle, I’d be pretty keen on that England job,” he revealed to The Guardian.

“But, with all this here, I’m left thinking: ‘Why would I really want to leave this club now?’

“Success can be a legacy. Maybe I can create one here so that, one day, people look back and say: ‘When Pardew was there that was a great period for the club.’” 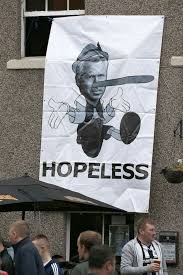 The divisive Londoner actually backed interim boss Gareth Southgate to take the England job full-time, but if he himself was offered the job he would jump at it.

Showing you cannot believe a word the man says!

He said yesterday he told Mike Ashley what he was doing wrong at Newcastle. YEAH! And do you believe that?