Pardew believes other Premier League clubs are suffering the after-effects of playing in Europe – just like Newcastle United did last season. 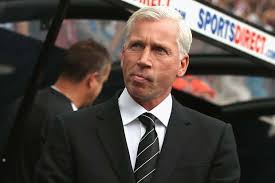 Pardew claims the fact the Magpies only narrowly avoided relegation is down to ONE thing - the Europa League!

"Thank GOD we are not in Europe this season", says the man who is contracted to the job for the next SEVEN years!

So let's be grateful we are not Man Utd, Man City, Chelsea and Man City, then. How those teams must be suffering!

Pardew uses Tottenham Hotspur as an example, saying the team - who had 31 shots at Tim Krul's goal on Sunday - were a little out of sorts.

Alan Pardew: “Spurs looked lethargic and that was us last year.

“It is a very different concept having to change over two days.

“Chelsea had it on Saturday against West Brom and they nearly lost as well.

“I think everybody needs to look at that. You need an extra day rest.”

As well as Spurs, England’s other two representatives in the Europa League this season are Swansea and Wigan Athletic, and no other manager has backed Pardew's claims that being OUT of Europe is better than being IN it.

Perhaps the man, who yesterday called himself "A WINNER", should actually forget self-praise and get Newcastle to do something none of his other clubs (under his management) ever achieved ... WIN SOMETHING!

We want YOUR vote.

Who was the player you disliked most during his time on Tyneside?