Nolan And Carroll Heading To Championship?

I cannot see it myself, but if they DID go down Andy Carroll would be the highest paid player in the Championship next season. 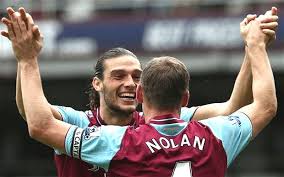 Olivier Giroud's sublime finish and a double from Lukas Podolski gave FA Cup finalists Arsenal a 3-1 win over West Ham at the Emirates Stadium to move back to fourth in the Barclays Premier League.

After a slow start following their nerve-shredding penalty shoot-out win over Wigan at Wembley on Saturday, the Gunners went behind to a scrappy goal from Matt Jarvis on 40 minutes.

However, Podolski quickly levelled before half-time, with Giroud's superb take-down and close-range finish putting them in front on 55 minutes.

Another powerful strike from Podolski with 13 minutes left secured all three points which saw Arsene Wenger's side leapfrog Everton, who host Crystal Palace on Wednesday night.