No Rooney - Can Only Be Good News!

“Swansea didn’t have their two main strikers on Wednesday, and I don’t think they could have played any better.

“But they’d been unbeaten in 12 games before Everton. They’re in form. I think that game was a blip.

“We drew there a couple of years ago, and last year we came close to winning. A couple of errors at the back of the game cost us.

“We’ve performed well there. I don’t want to be disappointed like I was last year.”

Javier Hernandez snatched victory for Manchester United in a pulsating and controversial 4-3 Premier League victory over Newcastle at Old Trafford in which Alan Pardew's side led on three occasions.

The Red Devils looked as though they would have to settle for a point at best but struck at the start of added time as the Mexico striker applied the finishing touch to Jonny Evans' cross to spark jubilation from a previously furious Sir Alex Ferguson as his side moved seven points clear of Manchester City following their shock 1-0 defeat at Sunderland.

Newcastle made a dream start as they were gifted the lead with only four minutes on the clock. Michael Carrick failed to control the ball in midfield with Demba Ba advancing towards the United box before unleashing a low shot which David De Gea could only push into the path of the grateful James Perch to tap home.

United were back on terms in the 25th minute when Evans applied the finishing touch at the right end from close range after Tim Krul could only half block Javier Hernandez's low shot following a Van Persie free-kick which caused confusion in the visiting defence. 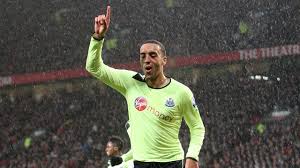 But the moment of controversy arrived soon after with Danny Simpson's low shot from the right corner of box turned home by sliding Evans. Assistant referee Jake Collin's flag went up for offside against Cisse, but Dean eventually gave the goal as he correctly ruled the Newcastle striker had not touched the ball.

It was the right decision from the official, but sparked fury among the home players and supporters, while Ferguson sat with a face like thunder in the Old Trafford dug-out, chewing furiously in the pouring rain, with his stewing anger unleashed as the teams emerged at the start of the second half, an incident the Football Association are sure to take an interest in.

Newcastle were inches away from taking a 3-1 lead before the interval as Sylvain Marveaux picked himself up after having his heels clipped by Hernandez outside the box to curl a glorious free-kick against the face of the crossbar with De Gea rooted to his line.

The growing anger of the home support turned to delight in the 58th minute when Patrice Evra collected Perch's attempted clearance, held off Marveaux and unleashed a low shot from the edge of the box which evaded the diving Krul before finding the corner of the net. 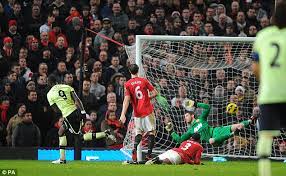 Old Trafford was baying for a penalty once again with just over 10 minutes remaining when Hernandez's shot struck the arms of Coloccini from close range, with Collin subjected to more of Ferguson's opinions, with Van Persie then volleying narrowly wide at full stretch moments later

Hernandez missed a glorious opportunity to steal the points for the league leaders, but somehow headed wide from a glorious Antonio Valencia cross from six yards out and there was still time for Sammy Ameobi to strike the base of the post, with De Gea grateful to see the ball bounce back into his arms.

Hernandez headed straight at Krul from another good position soon after and it looked as though it would not be his day, only for the diminutive forward to steal the headlines in added time with a typical poacher's finish as the visiting defence switched off at a crucial moment, while Vurnon Anita was carried off after a late challenge from Valencia which could have brought a second booking.