No Police Escort For Mackems! 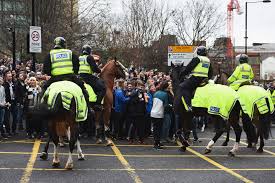 Newcastle United will host Sunderland in what was traditionally one of the most tense matches in the football calendar.

The last time the two teams met on Tyneside, in December 2014, Northumbria Police tried a new style of policing.

Gone were the rings of steel and frog-marching fans from railway station to stadium. Instead, Black Cats supporters were encouraged to make their own way to the ground with police only stepping in if trouble flared.

The move, branded risky by some, paid off with a relatively trouble-free derby day.

And after consulting with fans, the force is hoping to once again adopt the same model for Sunday’s 1.30pm kick-off.

However, operations commander Chief Supt Steve Neill is reassuring the public there will be a highly-visible police presence before and after the game, and officers will be ready to adapt plans if necessary and deal with any disorder that arises.

He said: “Supporters from both Newcastle and Sunderland have been consulted in the run-up to the derby and they have had a valued input into preparations for the match.

“We must not forget we also have to police a normal shopping day in Newcastle and there will also be a Comic-Con event being held at the Metro Radio Arena on the day of the match.

“Our priority remains the safety of the public and anyone in the region on Sunday should be reassured that we have resources in place to tackle any disorder that may occur.

“We will continue with the tactics that have proved successful in recent matches between these two teams but we understand the importance of this game and our policing operation will reflect that.”

Extra police officers will be based at key points around Sunderland and Newcastle before, during and after the game to assist fans and members of the public who are not in the cities for the football.

Police have also worked closely with other agencies to once again secure an agreement with all licensees across the force area not to serve alcohol before 9am in a bid to minimise the likelihood of alcohol-related disorder.

This year, to help manage crowds at the turnstiles, police have worked with Newcastle United to install a queue management system that, it is hoped, will help supporters get into St James’ Park in a quicker and safer manner.

And as in previous years, Sunderland fans will be asked to remain in their seats for a short period after the final whistle, but the concourse will remain open so they will have access to refreshments.

Once supporters leave, it is hoped they will be able to make their own way to either the supporters’ coaches or to Central Station. However, there will still be a large number of police officers in the area to prevent any potential disorder.

Sunderland fans are also reminded that the coaches have been subsidised by the club and in previous years they have arrived back in Sunderland before trains had even left the station.

The tragedy prompted Sunderland supporter Gary Ferguson to begin a fundraising drive in memory of the victims.

And football fans on Wearside put their rivalries aside to donate tens of thousands of pounds, marking a new era of respect between the once bitter rival sets of supporters.

The match, on December 21, 2014, passed without major incident – with just 17 people arrested – as did the following two meetings between the teams, both of which were at the Stadium of Light.

In praising the fans for their behaviour, Chief Supt Steve Neill said he believed a new era in North East football was dawning and that derby day was now filled with all of the “passion” but none of the “poison”.