No Heart And No Fight

So what went wrong?

First - there was little or no effort.

Second - that team didn't look fit ... nowhere near as fit as the Leicester players.

Third - nobody in black and white (apart from the two central defenders) cared!

Newcastle head coach Steve Bruce delivered a withering critique of his side, accusing them of "complete surrender" after a comprehensive 5-0 defeat at Leicester. 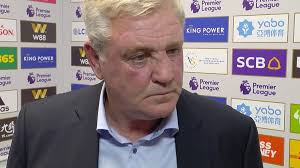 The Foxes went ahead through Ricardo Pereira's 16th-minute opener but it was Isaac Hayden's dismissal shortly before half-time that was the catalyst for the Magpies capitulating after the interval.

Jamie Vardy scored twice, either side of Paul Dummett's unfortunate own goal, as the visitors conceded three times in the space of 11 second-half minutes before Wilfred Ndidi completed the rout late on.

The result left Newcastle second bottom in the Premier League, with only one win from their first seven fixtures, increasing the pressure on an exasperated Bruce.

He said: "It was simply nowhere near what's required. Ten men, nine men, the one thing you can show is a bit of resilience, a bit of determination, a bit of fight or a bit of courage.

"We haven't shown enough resilience and that's disappointing for me as I sit here because that's the only thing that I genuinely demand of them.

"We have to apply ourselves better than what I've just witnessed there because it was a complete surrender too quickly and too easily.

"I'm not going to single out individuals but the whole team performance, the whole lot of them were nowhere near what's required to go and make a fist of it in the Premier League."

Newcastle's travelling contingent remained in buoyant mood long after the result became a formality but Bruce insists they must give their supporters something to cheer soon.

He added: "Too many (players) felt sorry for themselves, yes, we made mistakes and we got badly punished but to react in that way was the disappointment for myself, the players and the travelling support, which was quite unbelievable.

"It makes the club what it is, it's quite unique but we can't take that for granted either. We need to give them something to shout about.

"Being a manager or coach, I ultimately accept the responsibility because it's as bad an afternoon as I can remember."