No Action For 'Dive'! 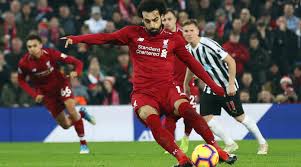 Liverpool forward Mohamed Salah will not be facing any action from the Football Association for alleged simulation against Newcastle.

The Reds thrashed Newcastle on Wednesday in a dominant 4-0 win to open a six-point gap between Liverpool and second-placed Tottenham Hotspurs.

During the game, Salah went down in the box in the first half after a pull by Newcastle defender Paul Dummett. The referee awarded Liverpool a penalty, which Salah converted successfully to score the opening goal of the game.

The 26-year-old was then criticized for alleged simulation by many, as they believed that it was a soft penalty with former Premier League referee Mark Halsey claiming that Salah should receive a two-game ban.

Liverpool host fifth-placed Arsenal on Saturday as they look to maintain a six-point gap between them and chasing league rivals. Kick-off is set to take place 17:30 GMT.