​Newcastle United host ​Liverpool in the Premier League on Saturday night, with nothing but pride at stake for the Magpies.

After a nervy first half of the season, Rafael Benitez's side kicked on to secure their safety for another year with a few games remaining, but they could still have a big impact on the destiny of the title this weekend.

Jamaal Lascelles should return to the starting lineup after missing last weekend's draw with ​Brighton, while Ayoze Perez looks to recover from a knock picked up at the Amex Stadium.

Here's how the Magpies could line up for ​Saturday's clash at St James' Park. Javier Manquillo (RWB) - Manquillo has struggled to hold down a regular starting spot this season but the Spaniard should make his fourth consecutive start against his former club on Saturday.

Jamaal Lascelles (CB) - Lascelles missed last weekend's draw with Brighton with a stomach problem but the captain should be fit for Liverpool's visit.

Paul Dummett (LCB) - The Welshman conceded a penalty in December's reverse fixture, when he was judged to have brought down ​Mohamed Salah at Anfield.

Matt Ritchie (LWB) - Ritchie has been used in several positions this season, with Benitez deploying him as a wing-back for the most part. 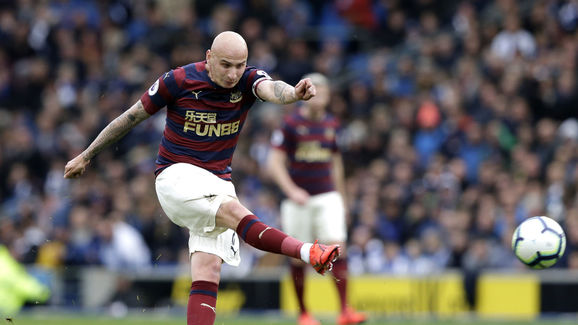 Ayoze Perez (RW) - No player has scored more goals in the Premier League since the start of March than Perez, who has five goals in his last three appearances.

Jonjo Shelvey (CM) - Shelvey made his first start since November against Brighton and even wore the captain's armband in Lascelles' absence.

Isaac Hayden (CM) - The 24-year-old has started every game since Christmas for the Magpies.

Christian Atsu (LW) - Atsu is still yet to register a goal or assist this season across all competitions. That is bad. Salomon Rondon (ST) - Rondon is one goal away from reaching double figures in the Premier League for the first time.